Donald Trumped by his own Stupidity and Mobile Device Management

This is a short and true-life story; the names have been changed to protect the blundering fools.

Donald is a forty something bloke, working in middle management, he still likes to think that he has something cool about him, but the reality is he’s secretly feeling and looking old. He considers himself quite tech savvy and often boasts about his connected home, shares poor anecdotes and dad jokes.

Donald was recently passed a new company iPhone (Donald secretly hates iPhone’s). This was configured with call routing, voicemail, outlook and all the usual gubbins by the internal IT team.He embraced the new device and set security with almost every fingerprint registered in the security scanner, this meant he had no problem opening the device even whilst clutching a KFC shake, car keys and chicken wings. (Donald really doesn’t need KFC!)

Life for Donald was good and his communication with the outside world was seemingly flawless. After a long weekend, during which Donald had partook in many delicious and sense numbing alcoholic beverages, he realised that he had allowed the mobile to run out of power.  With the might of EDF behind him (other Energy provides are available) he plugged the connections and waited till the device sprang to life, but wait. What was this? As the device sprang back to life and with each press of a finger, the machine refused to open and asked for a pin code! What was this dark magic bewitching his phone? 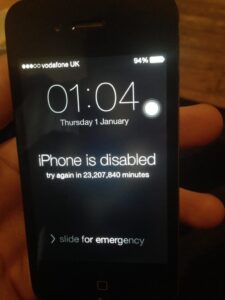 Searching his plethora of memories, Donald remembered. That moment, when the IT guy asked him to enter a series of numbers into the phone. Not paying any attention, he had done this without thinking and not though anymore of it, that was until now.He had completely forgotten what those bloody digits were. 54681, 56418…56879…64581… and so, it dragged on and on, longer than a DFS clearance sale.

After many attempts and some choice language, this smart device rejected Donald, and suggested a cooling off period, not allowing him to keep inadvertently enter any old tosh numbers. It also suggested that he got in tough with his administrator.  Donald was not going to seek help, he had the confidence and tenacity of a cornered buffalo and would go down trying to guess the 5-digit pin. No device was going to highlight how feeble his mind was.

After continuing this line of enquiry, the phone not knowing it was Donald trying to reacquaint himself, locked. Firstly, for a minute, five minutes an hour and so forth. Donald began to believe that the iPhone could lock you out until judgement day and prepared to wait to meet his fate.  However, this did not deter Donald from his mission, and he continued to enter numbers until…

With a flicker of a screen the phone had had enough and reset itself. Donald was left staring blankly at an Apple welcome message beckoning him to set up the phone. It was at this same moment that a member of the IT team received an alert that suspicious activity on a mobile device had triggered the remote wiping protocol to protect any data. After all what kind of person wouldn’t be able to remember 5 digits!

I would like to say that at this stage Donald’s mobile rang, but sadly that was not the case.  The IT department made contact and Donald now feeling like a buffoon of the highest order, realised that he had made a mistake.

So, what can we learn from this?

Remember your pin! Finger prints are great, but you will need a pin at some point.

Pay attention to any reset options a device may offer you – Don’t be a Donald.

Mobile Device Management is amazing and if this device had of been stolen, no access could be gained to any personal data or gateways to the network. MDM Security ensures you have ticked boxes for compliance and can have a safe mobile workforce.

Donald is a dufus and just may be me!

If you would like to ensure your company data and systems are protected from Donald’s, Julies or even cyber criminals or opportunists finding lost device call us. Our Mobile Device Management delivers you a great way to manage, control and wipe devices that could be compromised.  The unfortunate tail of Donald highlighted how our phones were safe in the even in the hands of Donald.